From The New York Times (https://www.nytimes.com/2019/05/09/arts/facebook-antiquities-syria-iraq.html) 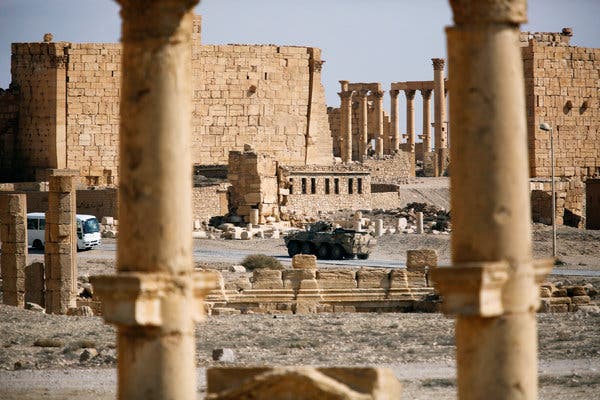 Ancient treasures pillaged from conflict zones in the Middle East are being offered for sale on Facebook, researchers say, including items that may have been looted by Islamic State militants.

Facebook groups advertising the items grew rapidly during the upheaval of the Arab Spring and the ensuing wars, which created unprecedented opportunities for traffickers, said Amr Al-Azm, a professor of Middle East history and anthropology at Shawnee State University in Ohio and a former antiquities official in Syria. He has monitored the trade for years along with his colleagues at the Athar Project, named for the Arabic word for antiquities.

At the same time, Dr. Al-Azm said, social media lowered the barriers to entry to the marketplace. Now there are at least 90 Facebook groups, most in Arabic, connected to the illegal trade in Middle Eastern antiquities, with tens of thousands of members, he said.

They often post items or inquiries in the group, then take the discussion into chat or WhatsApp messaging, making it difficult to track. Some users circulate requests for certain types of items, providing an incentive for traffickers to produce them, a scenario that Dr. Al-Azm called “loot-to-order.”

Others post detailed instructions for aspiring looters on how to locate archaeological sites and dig up treasures.

Items for sale include a bust purportedly taken from the ancient city of Palmyra, which was occupied for periods by Islamic State militants and endured heavy looting and damage.

Other artifacts for sale come from Iraq, Yemen, Egypt, Tunisia and Libya. The majority do not come from museums or collections, where their existence would have been cataloged, Dr. Al-Azm said.

“They’re being looted straight from the ground,” he said. “They have never been seen. The only evidence we have of their existence is if someone happens to post a picture of them.”

Dr. Al-Azm and Katie A. Paul, the directors of the Athar Project, wrote in World Politics Review last year that the loot-to-order requests showed that traffickers were “targeting material with a previously unseen level of precision — a practice that Facebook makes remarkably easy.”

After the BBC published an article about the work of Dr. Al-Azm and his colleagues last week, Facebook said that it had removed 49 groups connected to antiquities trafficking.

Dr. Al-Azm countered that 90 groups were still up. But more important, he argued, Facebook should not simply delete the pages, which now constitute crucial evidence both for law enforcement and heritage experts.

In a statement on Tuesday, the company said it was “continuing to invest in people and technology to keep this activity off Facebook and encourage others to report anything they suspect of violating our Community Standards so we can quickly take action.”

A spokeswoman said that the company’s policy-enforcement team had 30,000 members and that it had introduced new tools to detect and remove content that violates the law or its policies using artificial intelligence, machine learning and computer vision.

Trafficking in antiquities is illegal across most of the Middle East, and dealing in stolen relics is illegal under international law. But it can be difficult to prosecute such cases.

Leila A. Amineddoleh, a lawyer in New York who specializes in art and cultural heritage, said that determining the provenance of looted items can be arduous, presenting an obstacle for lawyers and academics alike.

Dr. Al-Azm said his team’s research indicated that the Facebook groups are run by an international network of traffickers who cater to dealers, including ones in the West. The sales are often completed in person in cash in nearby countries, he said, despite efforts in Turkeyand elsewhere to fight antiquities smuggling.

He faulted Facebook for not heeding warnings about antiquities sales as early as 2014, when it might have been possible to delete the groups to stop, or at least slow, their growth.

As the Islamic State expanded, it systematically looted and destroyed, using heavy machinery to dig into ancient sites that had scarcely been excavated before the war. The group allowed residents and other looters to take from heritage sites, imposing a 20 percent tax on their earnings.

Some local people and cultural heritage experts scrambled to document and save the antiquities, including efforts to physically safeguard them and to create 3-D models and maps. Despite their efforts, the losses were catastrophic.

Satellite images show invaluable sites, such as Mari and Dura-Europos in eastern Syria, pockmarked with excavation holes from looters. In the Mosul Museum in Iraq, the militants filmed themselves taking sledgehammers and drills to monuments they saw as idolatrous, acts designed for maximum propaganda value as the world watched with horror.

Other factions and people also profited from looting. In fact, the market was so saturated that prices dropped drastically for a time around 2016, Dr. Al-Azm said.

Around the same time, as Islamic State fighters scattered in the face of territorial losses, they took their new expertise in looting back to their countries, including Egypt, Tunisia and Libya, and to other parts of Syria, like Idlib Province, he added.

“This is a supply and demand issue,” Dr. Al-Azm said, repeating that any demand gives incentives to looters, possibly financing terrorist groups in the process.

Instead of simply deleting the pages, Dr. Al-Azm said, Facebook should devise a more comprehensive strategy to stop the sales while allowing investigators to preserve photos and records uploaded to the groups.

A hastily posted photo, after all, might be the only record of a looted object that is available to law enforcement or scholars. Simply deleting the page would destroy “a huge corpus of evidence” that will be needed to identify, track and recover looted treasures for years to come, he said.

Similar arguments have been made as social media sites, including YouTube, have deleted videos that show atrocities committed during the Syrian war that could be used to prosecute war crimes.

Facebook has also faced questions over its role as a platform for other types of illicit sales, including guns, poached ivory and more. It has generally responded by shutting down pages or groups in response to reports of illegal activity.

Some of the illicit items sold without proof of their ownership history, of course, could be fake. But given the volume of activity in the antiquities groups and the copious evidence of looting at famous sites, at least some of them are believed to be genuine.

The wave of items hitting the market will most likely continue for years. Some traffickers sit on looted antiquities for long periods, waiting for attention to die down and sometimes forging documents about the items’ origins before offering them for sale.