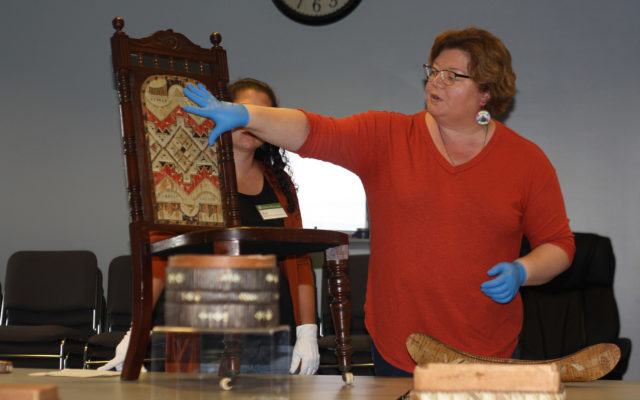 Thanks to a collaboration with the Bar Harbor-based Abbe Museum, the Aroostook Band of Micmacs were able to temporarily display a crucial piece of their cultural heritage and take the first step toward bringing traditional porcupine quill embroidery practices back to their community.

On Saturday, Sept. 28, Jodi DeBruyne, director of collections and research for the Abbe Museum, exhibited dozens of embroidered boxes as well as a canoe replica and embroidered dining room chair that are permanent objects in the museum’s Micmac collections. The artifacts were on display throughout the afternoon, for community members to observe and learn more about their history, before being taken back to the museum.

The temporary exhibition became possible through a Tribal Heritage Grant that the Micmac’s culture and historic preservation office received from the National Parks Service. Through researching historic documents and records, office staff found much information that confirms how porcupine quill embroidery evolved from 1650, a year before Europeans settled in the United States, and 1750.

But by 1750 the Micmacs had largely abandoned their five traditional porcupine quill embroidery stitch techniques for one quicker method in order to produce items geared toward European tourists. The change, Pictou said, came about because of colonization, a process during which French settlers formed relationships with the Micmacs only to later betray their trust.

“The French willingly and knowingly used alcohol to trick us [Micmac people] into being part of a credit/debit system of trade,” Pictou said. “In order to pay our debt, we had to start hunting for the French and bring them furs. We no longer had the time or resources to create those beautiful outfits.”

Perhaps more hurtful for Pictou was finding out that French settlers used their written records to portray Micmac people as inferior to European culture.

This dining room chair, embroidered with porcupine quills, is one of many Micmac artifacts that the Abbe Museum brought to Presque Isle for a one-day display on Saturday, Sept. 28. (Staff photo/Melissa Lizotte)

“They wrote about how when the Micmacs came to them after that period they looked like ‘beggers,’” Pictou said. “And they never acknowledged what they [the French] did.”

But instead of completely losing their cultural practices, the Micmacs adapted their porcupine quill embroidery techniques to produce objects such as small boxes and wall pockets, that European tourists purchased and used to keep jewelry and other items, as well as chairs and dining table sets.

Numerous such items were on display during Saturday’s exhibition at the Micmac administration and museum building on 7 Northern Road in Presque Isle. DeBruyne noted that the oldest of the boxes are around 200 years old. A single embroidered chair that the Abbe Museum has in their collection was likely built during the period from 1860 to 1890, during which the Civil War and Reconstruction era occurred in the U.S.

The Bar Harbor-based Abbe Museum brought dozens of Micmac porcupine quill embroidery artifacts, including this replica of a birchbark canoe, to Presque Isle this past weekend. (Staff photo/Melissa Lizotte)

DeBruyne said that typically formal museums such as the Abbe do not allow their collections to travel outside of museums. But she saw the collaboration with the Micmacs as an opportunity for the artifacts to “come home” for a day and to allow the community to learn more about their heritage.

“Some of these artifacts have not been home for 200 years,” DeBruyne said. “This is the first time I’ve personally brought artifacts to one of our Wabanaki communities in Maine.”

The Abbe Museum was founded in 1928 and focuses on preserving artifacts from Maine’s four Wabanaki tribes — the Maliseet, Micmac, Penobscot and Passamaquoddy. Located in downtown Bar Harbor, the museum also offers educational programs and an archaeological field school and partners annually with the Maine Indian Basketmakers Alliance to host the Native American Festival every summer.

This wall pocket, made from birchbark and porcupine quills, is an example of numerous items that ancestors of the Aroostook Band of Micmacs would have created to sell to European tourists during the 1800s. (Staff photo/Melissa Lizotte)

Beginning on Oct. 26, the Micmac culture and historic preservation office will host workshops in which a porcupine quill artist from Canada teaches people in the Micmac community traditional embroidery techniques. They will also learn how to harvest bark from birch trees, which historically have provided the base for porcupine quill embroidery.

The porcupine quill embroidery education project came about after the Micmac culture and historic preservation office conducted a community survey to determine how many people were skilled artists in wood carving, basket making, beading and other traditional Micmac artistry.

Their survey found that only one percent of the community’s population knew how to create porcupine quill embroidery.

Donna Sanipass, project coordinator for the Tribal Heritage Grant, said that she hopes the workshops help form a group of community members who become the next porcupine quill embroidery artisans, who can go on to teach younger generations.

“I want to educate people about who we really are as Micmac,” Sanipass said.