Out of one, many: The first object in the collection of the Indian Arts Research Center 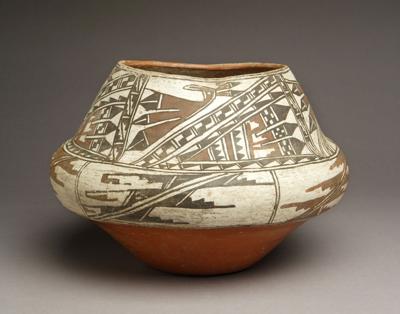 More than 12,000 objects comprise the collection the School for Advanced Research’s Indian Arts Research Center (660 Garcia St., 505-954-7205, sarweb.org/iarc). Most of them are historic examples of regional Native pottery, textiles, painting, jewelry, and basketry. But this renowned collection of Southwestern Native American art, as it exists today, began with a single object, an 18th-century polychrome vessel from Zuni Pueblo. “This k’yabokya de’ele, or ‘water jar,’ represents the first piece that began our collection in 1922,” says IARC director Elysia Poon.

Although SAR was founded in 1907 by anthropologist and ethnographer Alice Cunningham Fletcher, 1922 marked a significant turning point for what was then called the School of American Research. It was the year the school sponsored Santa Fe’s first Southwest Indian Fair, which evolved into the Santa Fe Indian Market we know today. Recognizing the importance of establishing a research collection to expand its mission, which included the preservation and study of the cultural heritage of the Southwest, SAR established the Pueblo Pottery Fund, which laid the groundwork for the development of the IARC.

The water jar is just one example viewers can see online in SAR’s new eMuseum (emuseum.sarsf.org/collections), which includes more than 800 historic examples of Zuni objects. The jar was made with a white slip and features a black-and-red-painted bird and feather design. Tribal collection reviewers Jim Enote, director of the A:shiwi A:wan Museum and Heritage Center in Zuni, and Octavius Seowtewa, a Zuni medicine man and member of the Zuni Cultural Resources Advisory Team, pointed to a unique feature of this particular vessel. Five separate compartments surround the body where the vessel bulges out from the neck. Each compartment contains wing and cloud designs, but the designs vary from section to section, which, they state in their online description, is unusual. They add that an oddly shaped area of the neck suggests it may have slumped under its own weight while the clay was still damp. As its name suggests, its intended purpose was to carry and store water, although it could be used for storing other items as well.

“The story of how it came into the collection represents just one narrative in the history of this piece,” Poon says. “The work we did in creating the eMuseum catalogue through our collections represents another narrative and emphasizes the importance of privileging community knowledge and participation when stewarding Native American collections.”

The IARC relies on the expert opinions of tribal members to inform them on their collections, ensuring greater accuracy in object descriptions, as well as helping to determine the appropriate levels of information that can be shared with the public concerning culturally sensitive materials.